“You Are Beautiful” campaign 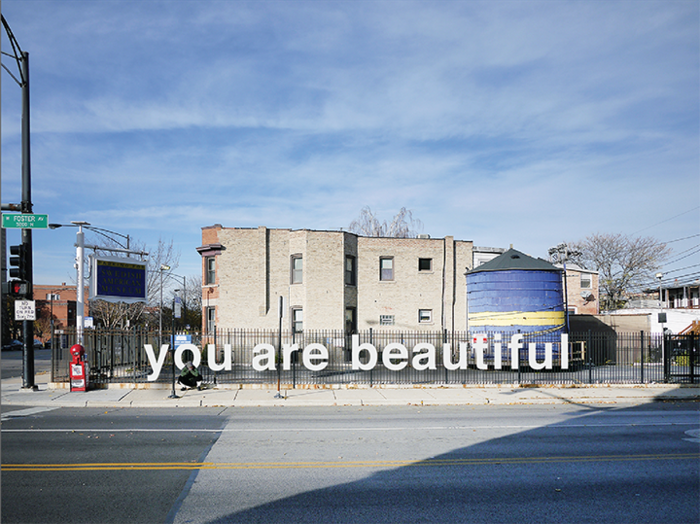 In early 2015, eco-Andersonville teamed up with artist Matthew Hoffman for a unique public art residency for Andersonville and beyond. Matthew, the creator of the You Are Beautiful project, brought several of his grand-scale messages of positivity to the neighborhood, to both brighten your day and bring life to some of the underutilized spaces in our community.  We want to show that these spaces, once activated through public art, can become invaluable community assets that provide needed breaks in the urban fabric of the neighborhood and generate positive presence and interaction along our streets.  All of this helps to further Andersonville’s evolution into one of Chicago’s most dynamic pedestrian-friendly communities, and it extends our legacy as a community that is open and inviting to all people.

After an extended residency in Andersonville, we plan to share at least one of these pieces with another community in the city. This is, in fact, one of our highest hopes for this campaign.  We don’t want this message to stop in Andersonville.  We want to show on the largest scale possible, the crucial role that public art plays in creating vibrant and healthy communities for all.  By launching this campaign and successfully funding our efforts, we have been able to provide a road map for other communities to follow. Our campaign reminds that we are all beautiful people, our neighborhoods can be beautiful places and beautiful things can be found in the places we least expect.

Justus Roe works in a variety of visual mediums including painting, large scale murals and sculptural installations. His work references architecture, city grid systems, and landscapes. His stylized forms, mark making and color palette develop work that is at once reminiscent of aerial perspectives and metropolitan environments.

Heather Hancock Evanston-based artist Heather Hancock originally developed Link to explore the points of intersection between the built and natural environments. Interconnected graphic lines, each with a unique geometry, point to both the natural world (waves, foliage) and built world (infrastructure, technology). Popping circles of glass in oranges and ambers suggest the energy and life in urban neighborhoods. The painted and glass elements float along the north masonry wall of the building, varying the rhythm of brick and concrete and connecting viewers with an overlooked surface in the streetscape. Hancock executed Link in collaboration with artist Sarah Laing, a community arts leader with a background in public art and painting.

The mission of Good News Only is to teach local youth how to manage a fine art gallery and thus build their critical thinking and work-study skills, to unite various socio-economic groups in the community, and to develop public art around Chicago.
Good News Only is a non-profit art gallery in Chicago’s Edgewater neighborhood. Good News Only offers a unique after school program for local teenagers that focuses on the business and curatorial sides of the art industry. Students in this program will not be making their own art, instead they will be encouraged to develop art exhibitions at the gallery and in public spaces in the neighborhood. Students will discuss how exhibitions can be influential on our greater society, whether they are in big museums, tiny galleries or public parks. They will gain real-world skills that they can use in their academics or any professional industry: communication, organization, teamwork, attention to detail, timeliness, deadlines, acceptance of differences, and confidence. Throughout the term, students will be inspired to think critically about the world around them.

Moss is a full service architecture studio with a penchant for environmentally conscious, sustainable design. Founder Matt Nardella and his team at Moss were a natural fit for this pilot project; as the organizers of Chicago’s first PARKing Day celebrations and because of their sustainability efforts they already had a great understanding of what we hoped to achieve with our first people spot in Andersonville. With an emphasis on the green space, openness and public seating of a real park, Moss delivered on our vision for this space down to the very last detail. We cannot even begin to thank Matt and his team for the immense amount of time and effort that they donated to this project. It is safe to say we simply would not have been able to design or build such an incredible site without their generosity and their insight.

Demeter Millwork was founded in 2010 with the mission of providing custom, quality, and unique millwork with a focus on sustainable design and construction. In the hands of Project Manager Hans Fedderke and his crew of incredibly talented carpenters, and craftsmen, Demeter created what we can confidentally say is one of the most unique and inviting public spaces in the City of Chicago. Demeter displayed an unbelievable amount of professionalism and generosity as they helped us through the unfamiliar territory of the build out and construction process that the project required. Being the first in the city to build a site like this comes with many perks but equally as many hurdles to overcome. We are infinitely grateful for Demeter’s services on this project.

Studio Murmur is a Chicago-based industrial design firm providing consulting services in design research, product design and product development. Studio Murmur worked hand in hand with Moss to design the most functional and enjoyable space possible. Their contributions to the final product, that you can now see on Clark Street, were invaluable.

With the incredible help of John Eskandari and his crew in Gethsemane’s Trees and Shrubs Department we have now collaborated on three distinct projects with overwhelming success. In July of 2011 John and his team helped us plan and execute our first pop-up green space that ultimately led to our pursuit of the People Spot. After a second successful pop-up park in July of this year, John helped us coordinate our people spot plantings, paying close attention to native plants and plant that would look great through the fall. Simply put, Gethsemane is an exceptional local Andersonville business that has supported the work of the Andersonville Sustainable Community Alliance and the
Andersonville Chamber of Commerce on numerous projects throughout the years, and the People Spot is one project we could not have done without them.

People Spot is one project we could not have done without them. Patch Landscaping is a full service local landscaping company that has worked closely with eco-Andersonville and the Andersonville Sustainable Community Alliance on a number of past projects including the donation and installation of our pop-up park grasses in 2011 and 2012. Naturally when were ready fill our planter boxes, and we were ready to lay down sod on Andersonville’s steepest slope we wanted Megan Anderson and her incredible crew at Patch Landscaping. Megan and her crew went over and above what was asked of them and we now have a beautifully landscaped oasis in part because of their hard work.

This project would not have been possible without the incredible commitment of the city’s Department of Transportation, in particular, Gerardo Garcia, and Janet Attarian of the Streetscape and Sustainable Design Program. Gerardo and Janet while working tirelessly as our liasons between the many different city departments involved project, they were also working as the architects of the city’s newly formed “Make Way for People” program. So not only were they influential in the development of our People Spot, but they were directly involved in the development of three other people spots that were installed simultaneously in the Kenwood and Lakeview neighborhoods. We cannot Gerardo, Janet and their team at CDOT enough, for their terrific work and patience through this long process.

Ruben Aguirre is a Chicago based painter who has transitioned from graffiti writing to abstract painter/muralist. He has produced a number of murals in the Chicago land area, and recently exhibited in “Paint, Paste, Sticker: Chicago Street Art” at the Chicago Cultural Center, and in The National Museum of Mexican Art exhibit, “Outside In: The Mexican-American Street Art Movement in Chicago”. He received a B.A. from Columbia College Chicago with a concentration in painting in 2002. Ruben was born in 1979 in Chicago, Illinois.

The mission of the Rebuilding Exchange is to create a market for reclaimed building materials. They do this by diverting materials from landfills and making them accessible for reuse through their retail warehouse, by promoting sustainable deconstruction practices, by providing education and job training programs, and by creating innovative models for sustainable reuse.  Rebuilding Exchange is a project of the Delta Institute.

RX Made is the Rebuilding Exchange in house line of simple and functional furniture constructed from reclaimed and locally-sourced materials. Drawing inspiration from salvaged materials, the RX Made line is designed in-house as well as through creative collaboration with partners in from the Midwest design community. Each unique piece is then handcrafted on-site in their workshop. RX Made strives to create durable, functional objects that are not only built to last, but also showcase the materials used in the construction.  RX Made is driven by a mission to create more local jobs, source materials from local businesses, and support the local art and design community.

Latent Design is a Chicago based full service architecture firm and strategic design consultancy working at the intersection of design and community development to create social, economic and environmental impact beyond the building. We use design as a tool to make the invisible forces impacting a project at local and global levels; policy, culture, climate, economy, visible through architecture. We offer innovative design solutions to those in resource and budget limited environments through a participatory approach that leverages local assets to directly generate project opportunities. Our collaborations range from small-scale tactical interventions, new construction community buildings, adaptive reuse, neighborhood master plans and design speculations.